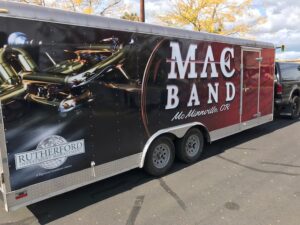 Last week’s Jazz Band concert was lovely.  It was short and sweet.  Mr. Barton gave out a few awards.  Thank you to those who came to support.

There have been a few changes made for this week leading up to the Starlight Parade.
Mr. Barton has gotten a bus for all of the band students (including 8th graders) to travel to George Fox University on Tuesday to see the Santa Clara Vanguard.  Students will be meeting at the band room at 5:45pm to travel to Newberg.  Practice has been cancelled, because Mr. Barton feels this will be an amazing opportunity.  We are moving uniform fittings to Thursday evening after the band concert.  If you are available to help after the concert please click here to sign up.
The plans for the actual parade have not changed.
Here’s the planned itinerary:
Students (and parent chaperones) will need to be in the band room at 5:15 p.m. to get ready and load the trailer.
Buses will leave the school at 6:00 p.m.
Buses arrive in Portland no later than 7:20.
The parade starts at 7:30, but the band will have plenty of time to prepare and warm-up before taking their place in the lineup.
At the end of the parade, there will be a quick bathroom break, snacks, and water.
Buses will be back in McMinnville by midnight (hopefully sooner).
Chaperones are still needed for the Starlight Parade. Duties include hanging out with a bunch of great kids for a few hours. Chaperones will need to ride the buses to Portland and back.  You are welcome to walk the parade route (37 blocks) with the band or walk another, shorter route (about 20 blocks) to the Disband Area. Click here to sign up.
What’s coming up:
The Symphonic and Concert Bands (along with 8th grade band students) will present their concert on Thursday, June 2nd at 7:00 p.m. All band parents are strongly encouraged to attend this concert.

Thanks for all you do,